The Luciferian Vatican Empire Is Imploding

The Pennsylvania attorney general has disclosed that the Vatican hierarchy is fully into the massive cover-up of dozens of sex crimes against over 1,000 children in dioceses within that State alone. But as despicable as it is, this is just one of many unfavorable disclosures made against the Vatican.

According Pennsylvania AG Shapiro, some priests even maintain archives of their pedophilic exploits which the Vatican hierarchy is fully aware of.

“There are specific examples where when the abuse occurred, the priests would go, the bishops would go and lie to parishioners, lie to law enforcement, lie to the public, but then document all the abuse in secret archives that they would share oftentimes with the Vatican,” Shapiro said, noting that the papers show that the Vatican was not only aware of the wrongdoings of the Pennsylvania priests but “were involved in cover-up.”

When asked if the cover-up goes “all the way up to the Pope,” Shapiro shied away from implicating Pope Francis or any of his predecessors in sweeping the potentially bombshell revelations under the rug for over 70 years. The transgressions were studied in a 900-plus-page report by a grand jury, the redacted version of which was made public by Shapiro on August 14.

The report covers six of the state’s dioceses, while two others were investigated earlier.

So far, authorities have charged two priests named in the report. Shapiro blamed Pennsylvania’s “weak laws” for the lack of more prosecutions – the state’s short statute of limitations prevents the authorities from pursuing charges against dozens of others, he explained. Additionally, over 100 priests suspected of child abuse and listed in the grand jury report have already died.

Of the two people charged, one is a former priest and a known sexual predator who already pled guilty, and the other will go on trial this fall.

A series of articles published by the International Tribunal of the Crimes of Church and State detail some of the major offensives against Bergoglio aka Pope Francis.

A European Court has issued a Summary Judgement against twelve accused members of the Ninth Circle sacrificial cult after none of the accused contested the criminal charges brought against them. “Pope Francis”, Jorge Bergoglio, is named in the August 10 Judgement of the Brussels-based International Common Law Court of Justice, which reads in part,

“By refusing to respond to the Court’s Summons the accused are declaring their implied guilt pro confesso, as if they have confessed to the charges brought against them. Accordingly, the Judgement requested by the plaintiffs is hereby granted, and all twelve of the accused are declared to be guilty of a monstrous criminal conspiracy to abduct, traffic, ritually torture and murder children. A Bench Warrant is hereby issued for the immediate arrest and imprisonment of the accused prior to their final sentencing.”

Besides Jorge Bergoglio, the convicted cult members include Irish Catholic Cardinal Sean Brady and Archbishop Diarmuid Martin, Vatican Secretary of State Pietro Parolin, prominent European politicians and businessmen, and two top officials of the World Council of Churches, including Anglican Bishop Mark MacDonald of Canada. (For a complete list of the guilty see the July 12, 2018 posting at www.itccs.org )

The decision of the Court, which successfully convicted and deposed former Pope Benedict of crimes against humanity in February, 2013, has sent immediate shock waves through the Vatican. A source within the Curia, the Roman College of Cardinals, claims that Cardinal Francis Arinze of Nigeria is now the front runner candidate in an impending “palace coup” that will remove Pope Francis/Jorge Bergoglio in the coming weeks, despite the upcoming papal visit to Ireland on August 25.

When facing imminent defeat, a Prince must present a public face of confidence and appear to be powerful in order to assure his wavering subjects and confound the hopes of his adversaries. – Nicolo Machiavelli, The Prince

I pray every day for Bergoglio to die. He is the greatest threat to the Church in its history. – Catholic Cardinal Raymond Burke to fellow Knights of Malta members, October 2017

After he came to office, Pope Francis realized how much he needed the Vatican money men to sustain his controversial rule. So he feigned an inquiry into the IOR (Vatican Bank) to conceal the extent of its looting and protect the usual gang of thieves under a smokescreen of liberal rhetoric. But the looting is massive. Even the Russian oligarchs have used the IOR to hide the billions they stole from their country. From Vladimir Putin on down, lots of people justifiably want Francis taken out. – Italian journalist to the author, June 19, 2018

Like a mythic curse, a violent madness has descended on my homeland. From the village of Knock to Dublin’s sprawl along the Liffey, Ireland is being militarized and regimented as if the civil war has returned. More than a thousand poor families and their children have been shoved into police prisons, roadways are being cordoned off and homes are being searched by the Gardai, and a “terrorist watch” network is harrassing suspected dissenters. Why? Apparently because a convicted criminal who thinks he is a god is coming to town, at a cost to an already-impoverished country of 32 million Euros. But the reason for the madness runs deeper.

The Pope Francis Road Show arrives in Ireland on August 25, with all the usual media-contrived gloss and fake ecstasy of any Vatican carnival routine. But even church commentators agree that this latest papal visit is unusual by the degree of security and sheer armed might that will surround Jorge Bergoglio. As a particularly obtuse cleric in Kerry remarked to a reporter last week,

“Why would a pope require such protection from his own people?”

Well saints preserve us, numb nuts! Maybe massive criminality and institutionalized child torture has something to do with it! Or how about that mass grave of dismembered baby corpses in Tuam, Ireland, concealed by a direct order from Jorge Bergoglio himself?

But leaving crimes against the innocent aside, as we usually do, there is the little matter that the Church of Rome is collapsing from within, especially and ironically in its traditionally most “devout” regions. We saw that displayed dramatically in Chile last year when twenty two catholic churches were burned to the ground and protesters besieged Pope Francis in Santiago. Ireland, another third world economic basket case, is as riddled with discontent towards Rome as is Chile. One Dublin commentator told me recently,

“All them cops around the pope will be shielding him from the worshipers, not the protesters. Lots of catholics despise the guy.”

One of the top despisers is Cardinal Raymond Burke from America, the Knight of Malta who has said openly that he wants Pope Francis to die. Burke heads the Dump Bergoglio faction in the Roman Curia that is angling to have Cardinal Francis Arinze of Nigeria, or a similar conservative, named as the new Pontiff once Bergoglio is forced out.

This faction is guided not so secretly by the convicted felon former Pope Benedict, Joe Ratzinger, still hiding out in the Vatican ever since we forced him there in February 2013. Church insiders tell us that Ratzinger is not acting alone but has Russian backing, since Vladimir Putin wants among other things all of his country’s looted currency returned from the cellars of the Vatican Bank. Ratzinger will so oblige the Russkies in return for their help in winning him back the papal tiara.

Ah, the oldest game in history: the tangled web of Vatican corruption. And of course there’s more. Encouraged by our common law prosecutions and attempted arrest of Jorge Bergoglio in Geneva on June 21 of this year, human rights lawyers in America, Argentina and Spain are now seeking a new international arrest warrant against him that they feel can only succeed once he is removed from office. Bergoglio’s Dirty War association with the Argentine military junta, his membership in the child-killing Ninth Circle cult, his alienation of traditional Cardinals and his kowtowing to Vatican Bank mobsters have all combined to unite his many enemies into the common cause of removing him. Hence the armed camp around him.

Back in the fifteenth century, Nicolo Machiavelli made a good living out of advising popes. His chief remedy for a Pontiff under seige was to generate the kind of permanent appearance of confidence and humilty that Jesuit-trained Jorge Bergoglio is so adept at feigning. But Machiavelli was ultimately a realist, as is a political survivor like Bergoglio. The latter knows only too well that in a time of crisis even the smallest threat can undo the most powerful ruler: including the threat of an idea. And the idea that We the People have the power and obligation to be the law and arrest those who are killing our children has mushroomed and taken hold across our world: including in Ireland. It is that idea, so fatal to any tyrant, that must in the latter’s mind be stamped out, either by guile or terror. And Jorge Bergoglio is an expert at both.

Bergoglio does have a talent for speaking the right line for the right audience, so much so that you will start to think that he’s agreeing with you. But this is what Jesuits do when they’re dragged into a corner.

There’s no form of Vatican apology that will assure us that all of this will never happen again. They should all be hanged in the nearest lamppost, or better be locked inside a nuclear reactor, so that nothing of their remains shall ever come back to haunt us in the future.

It’s only a matter of time when the majority of the population will finally understand the hypnotic rituals they were subjected to by the Black Army of the Luciferian Vatican Empire, which has the full control of the competing media networks, opposing political parties, fiat financial system, and the entire school indoctrination system, that should lead to the achievement of real freedom in a planet of unfettered abundance for all. 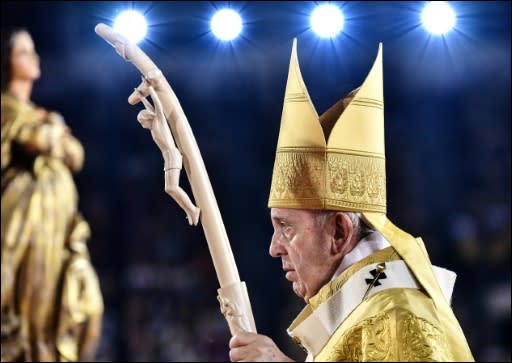 Pope Francis Calls on Migrants to Flood the US: 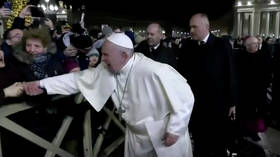 A woman grabs Pope Francis’ hand and yanks him towards her, at Saint Peter’s Square at the Vatican in this still image taken from a video, December 31, 2019. ©  Vatican Media/Handout via REUTERS
. 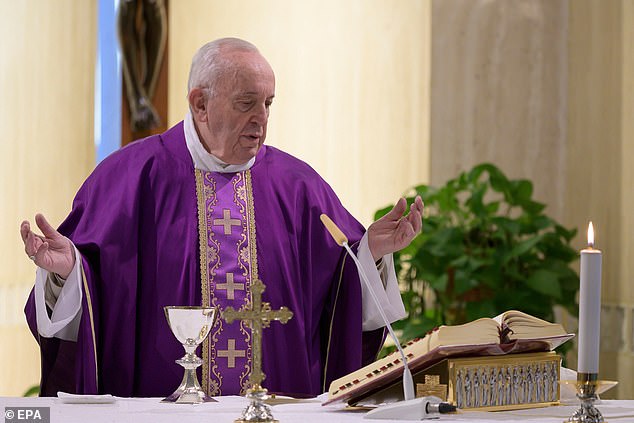 During a Mass in early March, 2020, Pope Francis 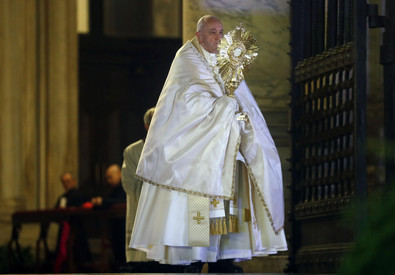