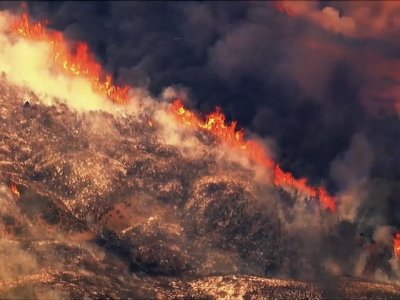 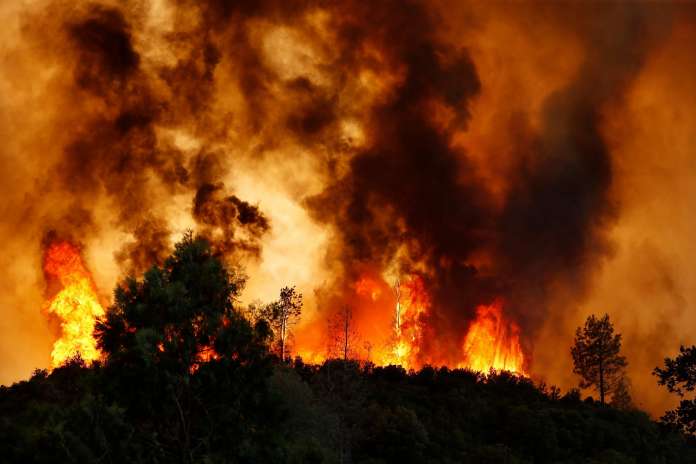 The Carr Fire as seen from All Saints’ Episcopal Church in north Redding July 26, 2018.
Jim Schultz

A resident took this photo about 3 a.m., Thursday, July 26, 2018 from Benson Drive at start of the dirt road. Contributed by Brennan Fox

A reader took this photo around 12:20 a.m. from the corner of Rock Creek Road and Benson Drive in the Keswick and Old Shasta area. Contributed by Natalie Ducat

The Carr Fire could be seen glowing in the early hours of Thursday, July 26, 2018 from as far away as Redding, about 10 miles east of Whiskeytown National Recreation Area.
Jenny Espino/Record Searchlight

In this photo taken Wednesday, July 25, 2018, a wildfire burns near the lake in Whiskeytown, California  (Hung T. Vu/The Record Searchlight via AP)

State of the Nation

“NO ONE IS DEBATING THAT CALIFORNIA HAS EXPERIENCED ITS FAIR SHARE OF NATURAL WILDFIRES OVER THE DECADES, ESPECIALLY WHEN THE SANTA ANA WINDS ARE BLOWING.

HOWEVER, THE LAST FEW YEARS HAVE SEEN A DEVELOPING PATTERN OF WILDFIRES AND FIRESTORMS THAT HAVE A MAJOR MANMADE COMPONENT.

FIRST, THE GEOENGINEERS ARTIFICIALLY CREATE THE WEATHER PATTERNS THAT PUSH VARIOUS PARTS OF THE STATE INTO DRY SPELLS AND/OR FULL-BLOWN DROUGHT CONDITIONS.

OVER THE MONTHS THE DRIED OUT VEGETATION BECOMES KINDLING DURING THE WILDFIRE SEASON.

NOW THAT EVERYONE KNOWS THAT FOREST FIRES AND BRUSH FIRES START SPONTANEOUSLY DURING THE HOT MONTHS, THE GEOENGINEERS UTILIZE FIRE-STARTING TECHNOLOGIES

THAT LITERALLY ACT AS “FLAMETHROWERS” THAT “RAIN DOWN FIRE FROM THE SKIES”.

OF COURSE, DEPENDING ON THEIR SPECIFIC TARGETS, THE ENVIRONMENTAL TERRORISTS WILL ALSO EMPLOY ARSONISTS STRATEGICALLY PLACED ON THE GROUND.”

In the video, Deborah Tavares bravely stands up at a Sonoma County Board Supervisors Meeting to disclose that the northern California fires are caused by Directed Energy Weapons. She ties these fires to the Rothchild family.  She further shows proof of the local newspaper’s front page headlines which show that the coincidentally ancient artifacts were found in the rubble, which now gives the State the right to take over the land for an archaeological dig. Residents will not be allowed to re-occupy and re-build in a land grab takeover by the state/Illuminati. stopthecrime.net
The strangeness of the California fires, August 27, 2018, Galactic Connection