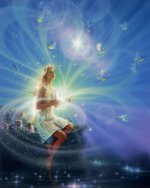 Frequencies of Illumination increase as pardons are granted.

The frequency of Divine Light pervades more and more planet Gaia and all Nebadon Universe. Illumination increases as NOW the Laws of LOVE and Forgiveness are applied by the Children of God towards the raptor/destroyer monsters on our planet.

Essentials of the Illuminates are employed.

The tumultuous storm is all in us and around us now. There are great Essences of Illuminated Beings assisting us mightily. The Galactic Fleets of Christ Michael Aton of Nebadon are conducting dramatic wars up in space to liberate us. Dramatic battles are carried out in the underground bases of the dark still hiding.

There are many dark entities and satanic rulers who refuse giving up their power and control over us. Yes, too beautiful are the humans, these Children of God, their loving hearts, their wondrous, emotional souls! Docile we go to work from morning till night, for them to get richer. With the price of our blood do we mine for them the diamonds of this beautiful planet, her gold and her oil. Slaves are we over the ages, carrying the dark lords on our back with the sweat of our foreheads, for them to usurp us even stronger and so monstrously suck our blood. For yes, our DNA, God gifted us with, are so precious, we are tortured and killed in delight, our sweet children sacrificed as sex slaves, their flesh eaten, their blood drunk.

Even under volcanoes in their hidden tunnels and at great depths up to 600 miles under such places like Fidji, Galapagos Isles, Easter Isle or Bali, deep under oceans must the Galactic Warriors blow their palaces up, force them out. For the Trumpet of FREEDOM resounds all through the Universe, and the Cosmic Liberty Law of God must be respected in all Creation, by all perfectly equal.

Fires of stargates are formed.

The Galactic Fleets are forming stargates of Fire, adjusting them for the dark lords they relocate from Gaia to where they belong.

Mellorite canyons are crossed with ease.

Mellorite are crystallized silicates mostly of iron, magnesium and calcium, comprised in Gaia’s mantle and the oceans crust. The colour of these crystals tends into garnet, and they are morphing under the rock pressure and in the volcanic fires. It seems, the dark caves and tunnels are carved in these rocks/canyons, found with ease by our Galactic Brothers.